You are here: Home / The Buganda Cultural Trail

The Buganda Cultural Trail : Buganda kingdom is the largest and most influential kingdom in Uganda majorly because of its central location within the capital city and also organized socio–political set up. On this tour, visit various cultural sites significant to the kingdom and learn of the many intriguing customs, beliefs, history and practices of this kingdom. 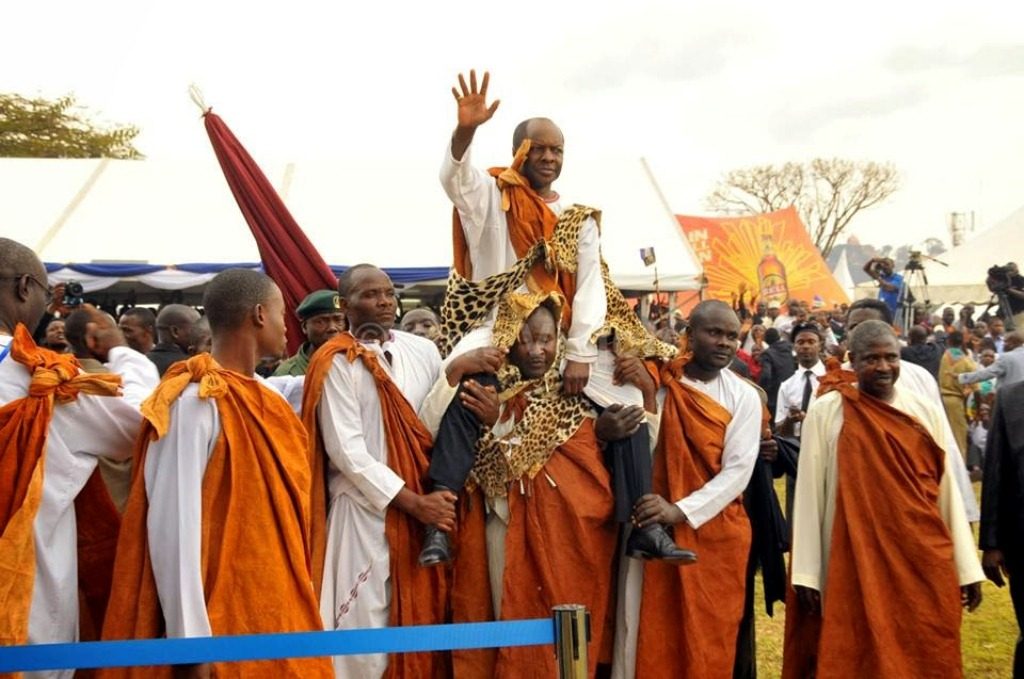 Naggalabi Buddo is the site where the Kabaka’s of Buganda are crowned since the 14th century. It is said that succession ceremonies take place at Buddo hill because it’s where Bemba the brother of Kintu won a battle against his brother Kintu and claimed the throne declaring himself king in the 13th century after killing him.

The site has different houses which are culturally significant during coronation of the Buganda kings, particularly, there is Buganda house where the prince spends nine days after being crowned king, during the nine days, women are not allowed to be in the area until they are completed. He also makes strategies on how to run the affairs of the kingdom and selects his cabinet then. This period is known as the days of tension locally termed as Enaku ezobwerinde

This tradition is fulfilled by all kings after coronation and the current Kabaka Ronald Kimera Mutebi II was coroneted here too in 1993 just as his ancestors which ceremony was attended by many Baganda celebrating and welcoming their new King.

On this hill, there is a large tree with long branches bending to the ground from the top with an umbrella like shape known as Mbonelede meaning I’ve learnt a lesson, it is believed to be one of the oldest trees here, It is said to have been used as a court during the reign of Kabaka Kintu. During court sessions, people would plead for mercy under this tree which led to its name and later the following kings after Kintu also used it.

Today Katereke prison ditch is a peaceful shaded site comprising of a circular ditch enclosing an area of about 70 meter in diameter. The ditch and bank are earth works about 10 meters from top to bottom found only 30 minutes from Kampala past Buddo on Masaka road about 1 Km from Nsangi trading centre.

The Katereke Prison ditch is said to have been dug by former king of Buganda, Kabaka Kalema in the late 19th Century.  In 1888, strange people claimed to be Muslims had removed Kabaka Mwanga from the throne who was then succeeded by Kabaka Kiwewa though his reign was short-lived. After Kabaka Kiwewa, Kabaka Kalema was enthroned.

However, Kabaka Kalema felt greatly threatened by his siblings who would easily become his political rivals. It wasn’t long before he ordered his clan chiefs to construct a prison and imprisoned all princes and princesses which is the present day Katereke Prison ditch.

Despite the imprisonment, Kabaka Kalema still felt threatened so he ordered for their execution in total 30 of his brothers and sisters, this caused wide spread fear in the Kingdom among his subjects who feared their lives would be taken next. After a year, Kabaka Mwanga returned to the throne and exiled Kabaka Kalema who passed away months after. It’s claimed other royal prisoners were also starved in the prison ditch during the savagery time of Kabaka Kalema’s reign.

Katereke Prison Ditch is one of the most significant cultural sites on the Kabaka’s trail in Buganda Kingdom as well as a perfect birding destination with a number of bird species.

This is Ssekabaka Suunas resting place Situated in Nabweru Wakiso district. From the hills on which the tombs are located, one can see Kagoma Hill top where Ssuna built a home for his mother. Set in a beautiful and spectacular view, the impressive grass thatched tombs are a 30 minute’s drive from Kampala. Originally the hill was called Wamunyenye because the roads traversing the hill were lined with stones that glitter like stars. There are two conflicting stories as to how the place came to be called Wamala.

Kabaka Suuna was the 29th king of Buganda who ascended to the throne around 1824, he had so many wives that he did not mind giving away one of them who was pregnant to the Arab visitors who took her away to Abyssinia (Ethiopia). It was during the reign of Ssuna that Islam was introduced in Uganda by the first Arabs who arrived in Buganda in 1844. They gave him gifts like mirrors, guns and clothes, he was the first Kabaka to wear a Kanzu. During his reign, Ssuna added the counties of Bugalazi and Buyaga to Buganda. He loved adventure and spent his free time hunting.

Ssuna is remembered for having built Kasubi Tombs which was his first Palace after enthronement, but he decided to go back to Wamala to be close to his mother, for whom he had built a house at nearby Kagoma. He is also remembered as the first Kabaka of Buganda to be buried with his jaw intact. The word Kabaka comes from the phrase: “Kano kaba kani?” (Whose jaw is this?) This is because upon the Kabaka’s death, his jaw would be removed and his widows would be asked whose jaw it was.

Upon his death, his Palace at Wamala became his tomb in accordance with Buganda culture, which stipulates that a Kabaka’s palace is his final resting place. The tomb was given the name Batanda bezaala. They are looked after by a number of care takers led by Nnalinya.

According to Buganda culture, a king does not die but gets lost in the forest. Inside the tomb, one is shown the entrance of the forest, though it is a Taboo to look beyond the entrance. Behind the tomb is an over grown bush and the roof is in in dire need of repair as the last renovation took place in 1958 during the reign of Sir Edward Mutesa II.

From Wamala one can see the tombs of Ssuna’s mother from a distance. Originally called Nakazzi Nganda, Ssuna called his mother Kanyange (one who is bright) because she protected him when his life was in danger. The first and second Nnamasole were buried at kanyange tombs. At Kanyange a number of women make mats, baskets and paper. These are sold to the visitors in order to raise money to help maintain the tombs. At the end of history lesson, that is the tour of tombs, one can’t help but appreciate the mother-son bond that existed between kanyange and Ssuna.

This UNESCO World Heritage Site is a burial ground for four kings of Buganda and other members of the Buganda royal family making it an important spiritual and political site for the baganda as well as an important example of traditional architecture.

Some of the major buildings there were almost completely destroyed by a fire in March 2010, the cause of which is under investigation. As a result, in July 2010 it was included in the list of World Heritage sites under danger.

This place sits on about 64 acres on Kasubi hill about 5 kilometres northwest of the city Centre. Most of the site is open agricultural land that is farmed using traditional techniques.

One corner contains a royal palace built in 1882 by Kabaka Muteesa I the 35th Kabaka of Buganda to replace a palace built by his father Ssuna II in 1820. The new palace became a royal burial ground on his death in 1884. The site is one of 31 royal tombs across the Buganda kingdom since the kingdom was founded in the 13th century.

Traditionally, the body of the deceased king was buried in one place, with a separate shrine for the deceased king’s jawbone believed to contain his soul. Unusually, in a break from tradition, the site in Kampala contains the royal tombs of four Kabakas of Buganda.

Descendants of these four Kabakas are buried elsewhere in their palaces turned tombs.

This place of worship is located on a hill in the centre of Ugandas capital and largest city.

Kibuli Hill rises to a peak of 1,211 m above sea level and most of it was owned by Prince Badru Kakungulu a member of Buganda royal family before he donated it to the Ugandan Moslem community. In 1844, Arabs came to Uganda during the reign of Kabaka Suuna II of Buganda Kingdom, they introduced Islam which he embraced however, there were some teachings which were at odds with traditions and customs of the Buganda culture like circumcision, traditionally, a Kabaka can not shed blood therefore this was unacceptable

Kabaka Ssunas son, Mwanga II stopped this practice when he became king. Over the course of the next generation, with the arrival of colonial powers the role of Kabaka was split from leadership of the Muslim community. Prince Nuhu Mbogo (meaning ‘buffalo’) was particularly strong so the British gave him the plot on the hill in Kibuli thinking he would build his palace there. Instead, he built it in the valley and donated the land on the hill for a small mosque to be constructed. Later, Prince Mbogo’s son, Prince Badru Kakungulu donated a further 80 acres in order that additional institutions could be built.

In 1941, the Aga Kan visited and wanted to assist in building a mosque on the site. The cost was to be 250,000 UGX and in order to help facilitate fundraising the Aga Khan offered a ‘shilling for a shilling’ fund matching programme and as money was raised building began.

This is the official residence of the current King of Buganda, it is customary for a new king to choose a hill where he builds a new palace which then becomes the new capital of the Kingdom and the King is free to rename the place as he so wishes however, the reigning King chooses not to live here because of the much blood that was shed and his father having been attacked here.

It was constructed by Ssekabaka Mwanga 11 in 1885 after shifting from his first palace in Masajja with an architecture similar to that of the Birmigham palace of England. He had always admired Nkaawo hill on which members of the Nvubu clan kept their grinding stones (Emmengo), these stones were used to grind herbal medicine. Mwanga decided to construct his palace at Nkaawo hill and the grinding stones were shifted. It`s from these grinding stones (Emmengo) that the name Mengo was adopted. The palace became Mengo Palace and the hill became Mengo hill. In this palace there is the Kabaka`s official house called Twekobe which derives its name from the efforts of the subjects in putting up the magnificent master piece. The word means uniting for a cause.

The following policies apply to all confirmed bookings made by the client;

Thank you for choosing Petnah Africa Tours and Travel

Scroll to top
error: Content is protected !!
Open chat
Chat with us on whatsapp