Arusha national park is an iconic wildlife destination in East Africa as well as Tanzania, the park is known for the black and white colobus monkeys, Mount Meru, swamps, lakes, waterfall and craters.

Arusha national park covers an area of 55 square kilometers encompassing of Mount MERU – a prominent volcanic cone with a spectacular crater (the Ngurdoto crater) on its top , the volcano and the crater are some of the most striking features in Arusha national park. 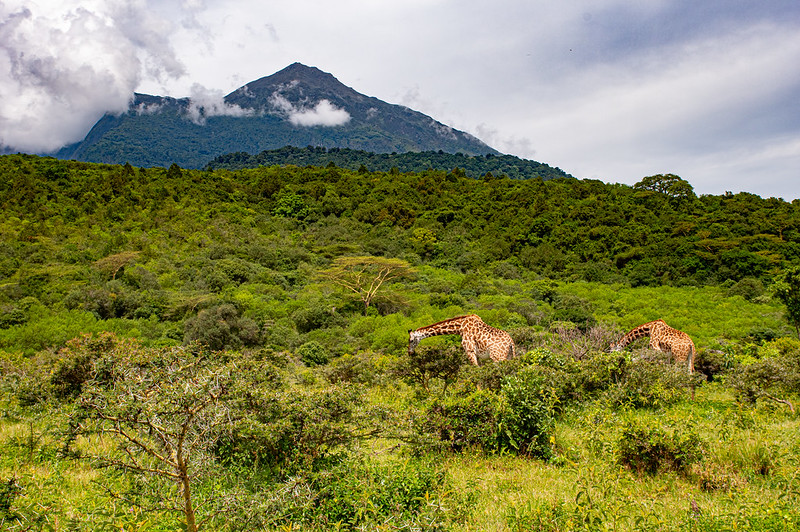 Mount Meru formed about 1-3 million years ago is the second highest mountain in Tanzania after Kilimanjaro, this volcano offers one of the most scenic and adventurous mountain climbing safari in Tanzania and East Africa as well as it involves dramatic walks along the knife-edge of the crater rim.

Arusha national park offers diverse range of spectacular landscape in 3 distinct area of the park (in the west. In the south and in the north – east)

In the west– this area comprises of the spectacular Meru crater funnels, the Jekukumia River and the peak of Mount Meru which lies on its rim

In the north – east – in this area there is the beautiful Momella Lake, a shallow alkaline. This lake has varying algal colours.

Arusha national park is located in north – eastern region of Tanzania, close to Arusha Town  adjacent to the Kenyan border and lies in the northern Tanzania safari circuit.

From Arusha Town, Arusha national park is approximately 35 kilometers drive. the park also lies on a 300 kilometers of some of the most iconic safari destinations in Tanzania that is Serengeti national park and Ngorongoro crater in the west, Kilimanjaro national park in the east.

The history of the park dates back in 1876 when Count Teleki, a Hungarian visited the Momella area. During his visit, he commented on the vast numbers of hippos and black rhinos he saw in the area (unfortunately the black rhinos are no longer found in the park).

In 1907, the Momella area became a residence are to the Trappe family. They established a cattle ranch to farm cattle in the area. Later Ms Trappe became the first woman professional hunter in East Africa. Following the establishment of the park as Ngurdoto Crater National Park in 1960, the farm was incorporated into the park. The Mount Meru area was also later incorporated in to the park and its name was changed to ARUSHA national park.

The name Arusha was derived from the Warusha people who were residents to the area.

There are also primates such as blue monkeys, black and white colobus monkeys habiting in the montane forest. 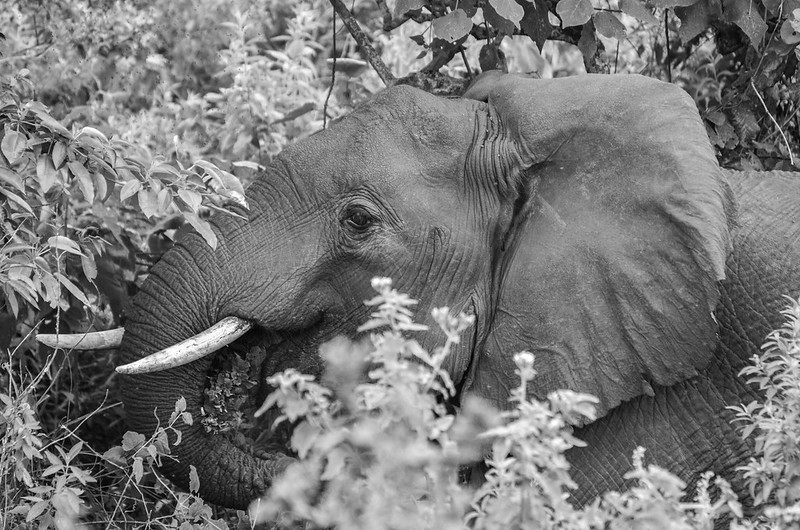 Arusha national park is one of the best birding spots in Tanzania with more than 400 species recorded, these species include forest species, water species such as pink hued flamingoes that congregate on Momella lakes, raptors and savannah species.

Flamingoes in Arusha national park are found on Momella Lakes, these flamingoes are attracted to lake because of the blue –green algae which they feed on. These flamingoes congregate in large numbers thus creating a pink plumage which reflects in the waters. 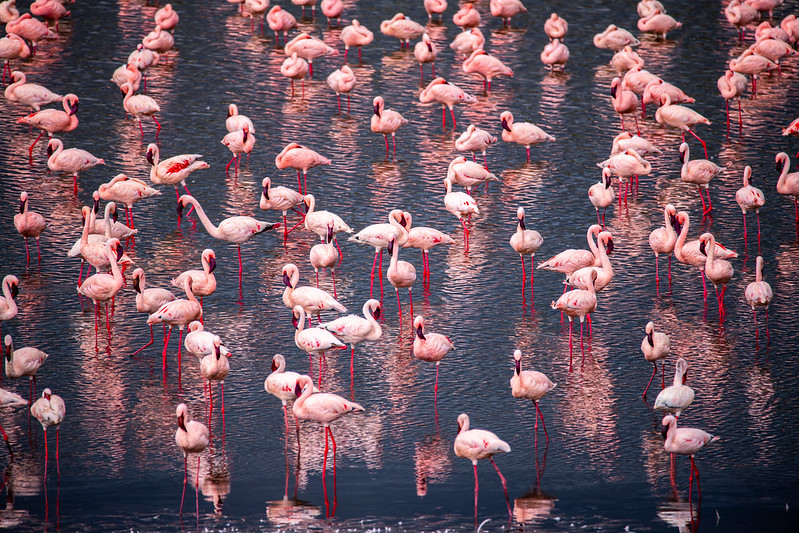 Mount Meru is the most striking feature in Arusha national park, this mountain is situated east of the Great Rift Valley. Mount Meru was formed between 1 and 3 million year ago as a result of volcanic eruptions.

Mount Meru is a famous destination for mountain climbing safaris in Tanzania, the volcano has a spectacular cone and offers some of the most scenic and rewarding climbing safaris in East Africa with its dramatic walk along the knee-edge of the crater rim.

Mount Meru starts its steep rise from a circular based about 20 kilometers across at 2000 meters, at about 2500 meters some of the wall has broken away giving the top half of the mountain a giant horseshoe like shape, the cliffs of the inner walls below the summit are rise to the more than 1500 meters high making them among the tallest in AFRICA.

Inside the crater of volcano, there is a subsidiary peak called the Ash Cone, this was created by the most recent volcanic eruptions.

One of the craters in Mount Meru is called Ngurdoto crater and it is one of beautiful features in the park, this crater is sometimes referred to as the Little Ngorongoro. It has a depth of about 300 meters and a diameter of 3.2 kilometers, the floor of this crater is softer which makes it unstable for game drives and it is only explored on walking safaris.

Other tourist attractions in Arusha national park include the Momella Lakes, the small Serengeti among others. 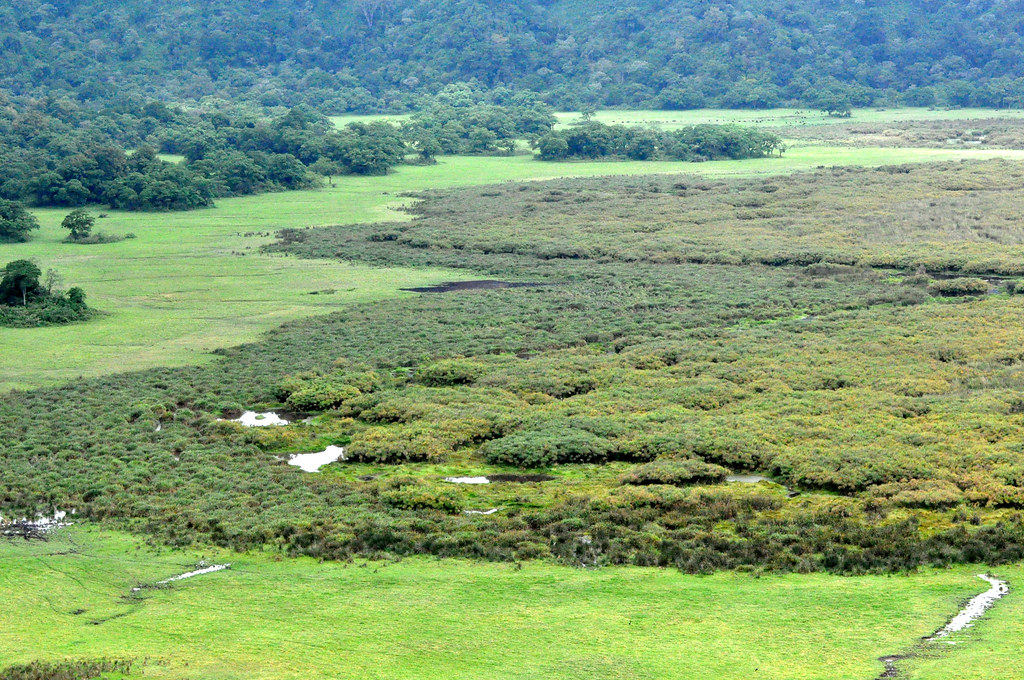 Tanzania safari activities to do in Arusha national park

Game drives is one of the most rewarding safari activities to do while on a classic Tanzania safari experience in Arusha national park, game drives are facilitated by several tracks running through Serengeti Ndogo also called the Little Serengeti. This area of the park is dominated by patches of open grassland and is situated just north of the Ngongongare gate.

During game drives you will enjoy magnificent views of the landscape with Mount Meru creating a spectacular backdrop and some of the animals to look out for include zebras, giraffes, giraffes, hippos, warthogs, waterbucks, pairs of dik – dik, reedbucks, elephants, red duikers, bush pigs, spotted hyenas, wild cats, leopards among others.

If you are a birder, Arusha national park is one of the most rewarding destinations to visit for a Tanzania birding safari, the park is a home to a bird checklist of 400 species with Momella Lakes being one of the best birding spots in the park.

Horseback riding is a great way of exploring the wilderness of Arusha national park while on a Tanzania safari with emitting fumes or disturbing the animals with vehicle sounds which sometimes scare them into hiding.

Horseback safaris take about 5-7 hours on hidden trails in savannahs between Mount Meru and Kilimanjaro, while on this activity you will enjoy watching several animals such as lions, leopards, cape buffaloes, elands, giraffes among others on the back of the horse.

Mount Meru at 4566 meters is the second highest mountain in Tanzania, this volcano is recognized for offering excellent Tanzania Mountain climbing tours. Climbing Mount Meru is done following the Momella route starting on the eastern side of the mountain and goes to the summit along the northern arm of the horseshoe crater.

Climbing on Momella route can take approximately 4 days and 3 nights.

Climbing Mount Meru is leads to the spectacular volcanic cone and the climb involves a dramatic walk along the knife-edge of the crater rim making it more adventurous.

Arusha national park is one of the few places in Tanzania where it is possible for visitors to explore on foot, walking safaris in this incredible park are done on trails passing through marshes, bushes and streams in the area. There are also several trail passing below Mount Meru and another that follows the Ngurdoto crater rim trail which descends into the crater (though not permitted).

Walking safaris lead to Njeku Viewpoint in the Meru crater floor which follows the 1st stage of climbing mount Meru.

Canoeing is a thrilling safari activity to do in Arusha national park done in a local canoe, this experience is a great way to experience the beauty of the park and Momella lake which is situated in the heart of the park.

Canoeing offers an opportunity for visitor to witness several animals in their natural habitat, some of the animals you will be able to watch include cape buffaloes, bushbucks, giraffes, hippos and many water birds such as kingfishers, cattle egrets, storks among others.

When to go on a safari in Arusha national park

The best time to visit Arusha national park for a safari is during the dry seasons that is from June to September and December to March, in the dry season the vegetation cover is thin offering uninterrupted views of the animals. Also animals congregate at watering holes in large numbers.

Where to stay in Arusha national park

Getting to Arusha national park

Arusha national park is situated about 35 kilometers northeast of Arusha Town and it takes about 40 minute drive from Arusha and 40 minutes drive from Kilimanjaro International Airport which is a major gateway to Arusha and the park for international travelers.

From Kilimanjaro International airport, it is about 46 kilometers to the park. To get to the park, you can use the main road between Arusha and Moshi, at the signpost you turn off and from this point it is about 10 kilometers north to Ngongongare gate one of the entry and exit points to the park.

Another entry point to Arusha national park is The Momella Gate which is reached using a round tract to Lariboro on the main Nairobi highway, passing Nanyuki Village.

To get to Arusha national park, you can use either public or private vehicles. At Petnah tours and travels, we offer private transportation to and from the park which is included in our safari packages.

There are several buses operating between Arusha and Ngare Nanyuki Village on a daily.